What to do when one has four days off in a row? Well go adventuring of course!

As our days off got closer we searched across the state for the perfect trip. Would we ski into some huts at Willamette Pass? (no, not enough snow). Backpacking in the Pueblos? Any rivers flowing in Washington? Oregon? Finally after the state received a deluge of rain we noticed the North Fork of the John Day River had gone up enough for us to consider packrafting.

Kirk and I had backpacked up the North Fork of the John Day over the 4th of July in 2011, and had oogled the packrafting potential of the river that runs 27.8 miles as a wild and scenic river, 10.5 miles as scenic, and 15.8 miles as recreational...which means 54.1 miles of river goodness! A trail runs alongside the wilderness section (of which we hiked last year) so we knew what we were in for. Traces of old mining camps along with active gold panning claims adds an excitement to the shiny glimmers in the sand, ther's gold in dem dar mountains!


We loaded the car after work on Wednesday, roasted a few turkey legs and packed some pie for our feast the next day. After a frosty night camped at the foothills of the Strawberry Mountains, we headed another 70 miles to our destination.

After turning off Hwy 395 at Dale, a gravel road goes about 16 miles upstream to the trailhead of the wilderness section. We had been able to drive up about 13 miles last summer before the road got too dicey for the car and disintegrated into a path where flood waters had washed away the rocky tread. This time we decided to park about 6 miles in and walk in the rest.

Yes, we brought lots of goodies to celebrate Thanksgiving in the woods, and yes, it is the end of November, so we had lots of warm clothes and layers, but GEEZ our packs were heavy. HEAVY. We were guessing 45-50 pounds each. As we labored under each step I marveled at how far I'd come in lightweight backpacking. On the Appalachian Trail back in 2002 I regularly carried a 45 pound pack. Over the 10 years I have modified, lightened and lost at least 25 of those pounds, which makes hiking 20-30 mile days cake in comparison. I had to keep reminding myself the wine, pie, turkey, gravy, cranberry sauce, mashed potatoes and stuffing would be worth it. (Yes, yes it was!)

Our Thanksgiving day was sunny, cold and glorious. We only saw one other human, a stalwart with a mining claim along the road and exchanged pleasantries for a few minutes before laboring further up the road.

We made camp that night at a vacant campground about 8 miles from the car. The water the whole day had been looking plenty floatable although we had another day of hiking before our boating began. The feast was laid before us and we indulged as we must on this day of days. 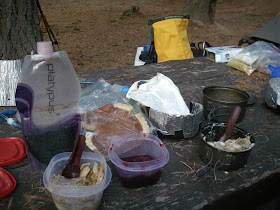 Friday began with an overcast sky. We hiked upstream with our still-monstrous packs until we reached the start of the trail...and the water started to look a little low for our boats. Wanting to continue until we found good camping, we bushwhacked off the trail just a mile later when we knew there would be no boating upstream of us, the water was just too low. So we hunkered down early in the afternoon, made a fire on the rocks, played cards and enjoyed our simple day.

Not long after drifting off to sleep we awoke to rain. Now, I know rain. Northwesterners are no strangers to rain. We were prepared, I had borrowed a pimp'n dry suit from the '80s from my friend Ted, we had warm clothes, our tent and tarp and rain clothes, but rain is still not so welcome on a cold November weekend.

Dodging drops in the morning, we inflated our boats. By the time we put on the water the sky had lightened up a bit, so when we started scraping bottom right off the bat, I was almost working up a sweat trying to navigate the shallow water and avoid rock traps. What we didn't know as we were hiking in was that the water was peaking on Thanksgiving day at about 400cfs. Ideal for packrafting. By the time we put on, the water had dropped to about 200cfs. Not ideal for packrafting.

Oh, we got along alright. The first mile was the worst, taking about an hour to navigate, but I was proud of the fact that we didn't need to get out of our boats once, but more than once had to lift myself and my boat off a rock.

The rain started, we lunched under the protection of an outhouse before the cold seeping through my body prompted us to hit the river once again. We had orginally been planning on camping about half way from our Friday night camp and the car, but the chill running through my body and the continuous rain made camping at the car sound so much more delightful. Warm clothes, a dry shelter and beer awaited us there, so we continued on.

The floating got better as we went on, but some sections remained plain hairy. The hours got longer and by the time we reached the car just before sunset, realized we had come 12 river miles that day, quite a feat for such low water.

Then Kirk had to go mention that we could conceivably drive home that night. Although we both like to think of ourselves as sturdy outdoors people, not afraid of being cold and wet, when I have a choice I will take comfort!  So we belted our PBR, piled in the car and set off.

Now while I like a little suffering now and again, Fall and Winter packrafting takes floating to another level. The added gear and cold factors do not dissuade me from the sport, but it wouldn't be wrong to say I would prefer to ski!

There is just enough snow on our mountains to start venturing out. Maybe we can start experimenting with a ski/packraft trip????